All You Need to Know About the Majestic Chinar Tree 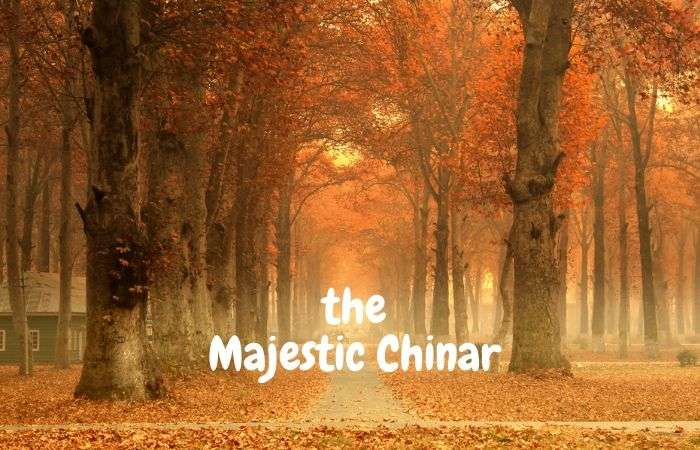 The Chinar tree is a magnificent, vibrant tree whose leaves change colors to red, yellow, and amber during the autumn season. This tree predominantly grows in the Kashmir region in India. The tree not only is a rare sight but is a form of majestic beauty.

One of the many tourist attractions in Kashmir, chinar grows to a height of about 25 meters or sometimes, even more, depending upon the growing conditions. Its botanical name is platanus orientalis and is called ‘Booyn’ or ‘Buen’ in the local language.

The Chinar tree is a pride of Kashmir! Its leaves look a lot like the leaves of the famous Maple tree. This tree is known for its longevity and can be found throughout Kashmir.

One of the unique characteristics of this tree is that its leaves change colors. During the summer season, the chinar tree’s leaves are deep green. But, as the autumn season sets in, the leaves change color to a beautiful blood-red, amber and yellow.

Talking about the etymology of the word, ‘chinar’ is word of Persian origin which when translated means ‘What a fire!’. The reason it got this name is for the fact that during the month of November, the tree looks as though it has caught fire. It is a deciduous tree and sheds its leaves once a year.

This tree is also found in Greece, Iran, Kashmir as well as some other countries.

The History of Chinar Tree in Kashmir

It is said that the tree originated in Greece. The Chinar trees of India have been an important part of Kashmir for centuries now and have a lot of historical significance. In fact, the oldest Chinar in Kashmir is 600+ years old and is thought to have been planted in 1374. It is located in the Badgam district in Kashmir and stands tall at 14.78 m.

There is a Chinar in almost every village of Kashmir. The tree is also super popular amongst the locals; for they love to sit under its shadow and enjoy the cool breeze.

It is believed that the Chinar trees of India were brought here from Persia. Mughal Emperors like Akbar, Nur-ud-din Muhammad Jahangir and even Aurangzeb were very fond of the tree. It was even declared as the ‘royal tree’. The great Emperor Akbar is said to have planted around 1,200 trees after he took over Kashmir in 1586.

‘Char Chinar’ is a beautiful island on the Dal Lake in Srinagar. The island gets its name from the fact that there are four Chinar trees planted on this island.

These four trees were planted by Emperor Jahangir in such a way that the island will always have a shadow from these trees. They are one of the main tourist attractions in Kashmir.

Kashmiri Literature and the Chinar

The significance of this tree is also predominant in Kashmiri literature, politics, religion and romance. The tree isn’t just an integral part of Kashmir’s heritage but it also has a very special place in every Kashmiri’s heart.

Not just politicians but the first fashion designer from Kashmir has named his brand ‘Bounipan’, also meaning leaves of Chinnar. The mention of this mighty tree is also there in various books like ‘A Dictionary of Kashmiri Proverbs and Sayings’ by James Hilton Knowles and ‘The Valley of Kashmir’ by Sir Walter Lawrence.

The Chinar Trees of Kashmir

The Chinar trees of Kashmir can be found throughout Kashmir’s landscape. Valley, cities, villages, hills; the trees are planted everywhere. A symbol for religion, the Chinar trees can be found in the Khir Bhavani temple as well as other Goddess Bhavani temples across Kashmir. These beautiful trees also adorn Kashmir’s popular mosques and shrines, including Sultan-ul-Arifeen and Hazratbal.

Not just in mosques and temples but there are also over 100 Chinars planted at the Naseem Bagh garden in Srinagar. This makes the garden a picturesque and must-visit spot for tourists and locals alike.

It takes a Chinar tree around 30 to 50 years to reach their mature height and around 150 years to grow to their full size! Just imagine the splendor they will bring.

The season of autumn celebrates the Chinar like no other! The Chinar tree of Kashmir, during this season, is at the peak of its beauty. The radiant red leaves that make the whole tree appear red, their rustling sound and a gust of wind in the air make everything look magical. One cannot just not fall in love with this scenery and marvel at the beauty that nature has blessed us with.

The Importance of the Chinar

The Chinnar tree doesn’t just amplify the beauty of Kashmir but also has a lot of other things to offer. On a summer day, it provides shade in parks as well as on roads. Its wood can also be sawn easily. After sawing, it can be used in making decorative items such as trays, small boxes as well as some furniture items. Kashmir decor is famous for walnut art.

It holds various medicinal properties as well. The bark of the chinar has antirheumatic and antiscorbutic values. The bark when boiled in vinegar is a great remedy for dysentery and diarrhoea. The fresh leaves of the tree can be applied for the inflammation of the eye and also in conjunctivitis.

The leaves of the tree are still useful even after they have fallen off. They are used to make charcoal to be used for a Kashmiri pot named ‘Kangri’, to keep warm on a cold winter day.

The Chinar trees of Kashmir: A Dying Legacy?

The number of chinar trees that have declined in Kashmir in the past few years is truly a matter of concern. The population of the trees has dwindled down from around 42,000 in the 1970s to about 17,000 in 2004 and the number has dwindled down even more now.

The trees are now nearing extinction. People and the administration cut down the trees for construction and for widening the roads.

Despite the laws imposed by the government on the ban of cutting down these trees, it is heartbreaking to know that illegal felling of the trees still continues.

There are various reasons why the chinar tree population is decreasing, but it is mainly due to:

However, various efforts are being taken by the state to revive the heritage of Kashmir and more trees are being planted.

The beauty of the Chinar tree is truly unfathomable. It is an integral part of Kashmir’s rich history and Kashmir is incomplete without its beautiful Chinar. We really hope that this legacy of the Chinar trees of Kashmir never dies and that the trees always stand tall in all their magnificent glory.