Habba Khatoon: The Sage of Kashmir 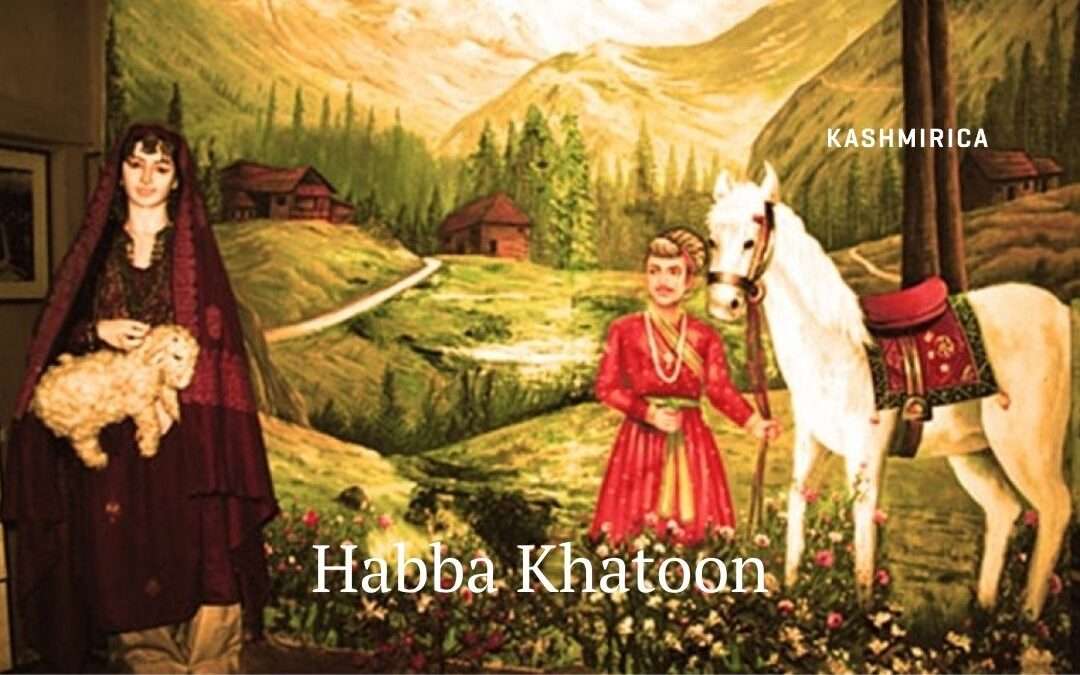 A beautiful and intelligent damsel from the saffron town of Pampore, Habba Khatoon was a Kashmiri poetess born in the 16th century. Named as Zoon (meaning, the moon) by her parents and fondly called the ‘Nightingale of Kashmir’, she is one of the most popular mystic poets from the valley. Her verses have traveled across time and even today, she is the sound and song of many Kashmiri gatherings.

In this article we unfold more about Habba Khatun, her life and her poetry.

The Life of Habba Khatoon

Born in 1554 in a small village called Chandhur in Pampore as a peasant, Habba Khatun or Khatoon was named as Zoon by her parents. As per oral tradition, she was called Zoon owing to her immense beauty.

There is also a theory that suggests that she was once baptised by a Sufi mystic on a moonlight night who gave her the name Zoon. And it was under the guidance of her Sufi mentor that she began to compose lyrics and sing. She had a beautiful voice and a natural talent for composing poetry.

Even though born in a peasant family, Zoon had learnt to read and write from the village moulvi. At a young age, Zoon’s father married her off to a peasant boy. But her marriage did not fare well and she was soon divorced. It is believed that she was mistreated by her mother-in-law and sister-in-law as they tried to change her behavior and make her live a more acceptable life. It was after her divorce that she started writing and singing songs in Kashmiri.

Later, after she had been divorced, she met and fell in love with Yusuf Shah Chak. And it was after her marriage to him that she changed her name to ‘Habba Khatoon’.

Yusuf Shah Chak, the King of Kashmir spotted Habba Khatun singing under the shade of a chinar tree in the fields one day. Mesmerized by her melancholic melodies and stunned by her beauty, he instantly fell in love with her. He later tied the knot with her and Habba, who enchanted him with her poetry, reigned as the queen for six years.

Everything was well between them for a few years until the time that Kashmir was annexed to the Mughal Empire. Although they had a happy marriage, fate soon drove them apart.

A popular legend says that it was at the end of six years of the marriage of Yusuf Chak and Habba Khatoon that Emperor Akbar summoned Yusuf Shah Chak to Delhi. While the accuracy of the tale that follows is dubious, this popular Kashmiri legend has survived through the years and is told generation after generation.

When he arrived at the Mughal court, Yusuf Shah Chak was sent to a prison in Bengal right away, never to see his beloved wife ever again. He was later moved to a prison in Bihar where he died and his grave still remains.

After two unsuccessful Army attacks on Kashmir, Akbar realized that taking Kashmir by force may not be the best way to conquer it and hence, called Yusuf Chak over to Delhi for a peaceful resolution. And in the conquest of acquiring the crown jewel of Kashmir, Akbar imprisoned Yusuf Shah Chak and throttled the romance between the two. After this incident, Habba became ascetic and wandered around the valley singing her songs for the rest of her life.

While there is little documentation of the story of Habba Khatoon and Yusuf Chak, this story has been told and retold, for years and years in the valley.

And while there may be some controversy as to what the actual story is, it is an important incident of Habba Khatun’s life as that is what gave rise to her popularity as a poetess.

Throughout history, there have been several women poets from different kinds of backgrounds and walks of life who did not just consider their voices worth hearing but also dared to stand out and be heard. And Habba Khatun is one among them.

In a time when women’s poetry mostly focussed on spirituality, Habba brought romantic lyrics to hers. While her verses are bold and majorly biographical, they also have a kind of universality to them. Her poetry was strikingly different as compared to the other poets of her time as it was candid and personal.

All of Habba Khatoon’s poems were full of sorrow and some in the memory of her estranged husband. Her soul-stirring poetry is immensely popular in the valley even to this day and her verses on love and romance still captivate the Kashmiris.

Habba Khatun is also credited for introducing ‘lol’ to Kashmiri poetry. ‘Lol’ is basically equivalent to the English ‘lyric’ that conveys brief thought and Habba is known to have introduced it.

The two main incidents that influenced her poetry are the failure of her first marriage and her relationship with Yusuf Shah Chak.

Through her poems, she remembered her love with the hopes of finding him. She also wrote of the miseries that were inflicted upon her by her in-laws. Having led a difficult life, she also talks about the perils of physical labor and even her descriptions of sweat and toil have a sense of beauty in them.

Her lyrical verses are deeply steeped in romanticism and are highly metaphorical and symbolic. Unlike the spiritual poets of her time, Habba’s verses talk of earthly love and are more pragmatic in nature.

Passed down orally through songs that women sang over the centuries, it is quite possible that the original words of Habba Khatoon poetry have been modified or reinterpreted.

What made her poetry so powerful is that she spoke in the language of the common people and about the issues that they related with.

Along with several other great poets, Habba’s contribution to the Kashmiri literature is truly phenomenal.

Habba’s ballads are very much alive and still sung to this day in the valley. Several contemporary Kashmiri lyricists have also acknowledged the fact that her poems have had a huge influence in their own work. And in several modern Kashmiri songs, Habba’s verses can be found.

A mountain peak in the Gurez valley of Kashmir has also been named ‘Habba Khatoon Peak’ after the great poetess. It is believed that she used to wander near this peak, and hence, the name. So if you ever get an opportunity to take a look at this gigantic mountain, you know its history and the story behind its name. Not just a mountain but an underpass in Lahore has also been named after this revolutionary poetess.

A collection of Habba Khatoon poetry has also been published by the Jammu and Kashmir Academy of Languages, Arts and Culture.

Interestingly, even the filmmakers of Bollywood had attempted to honor this legendary poetess by thinking of making a film on her not once, not twice but thrice. However, the films were never really completed. While the Bollywood film may never be completed but a Kashmiri film made by Srinagar Doordarshan pays a tribute to Habba Khatoon’s incredible life.

This was the story of Habba Khatoon, the last poet queen of Kashmir. Having lived a difficult life full of struggles, experiencing true love and giving the world a gift of poetry that will be treasured forever, Habba Khatoon’s life is a true inspiration. Habba Khatun died in 1609 and her tomb lies near Athwajan on the Jammu-Srinagar national highway.

Strikingly different from the poets of her time, Habba Khatoon was a bold poetess that Kashmir remembers and will still remember for the generations and generations to come. To know of Habba Khatun is to know of an integral part of Kashmir and more importantly, its literature. While not many people may know her outside of Kashmir, Habaa Khatoon poetry will remain etched in Kashmir’s history forever.

You May Also Want to Read: