History of Tea in Assam – How the British Discovered it? 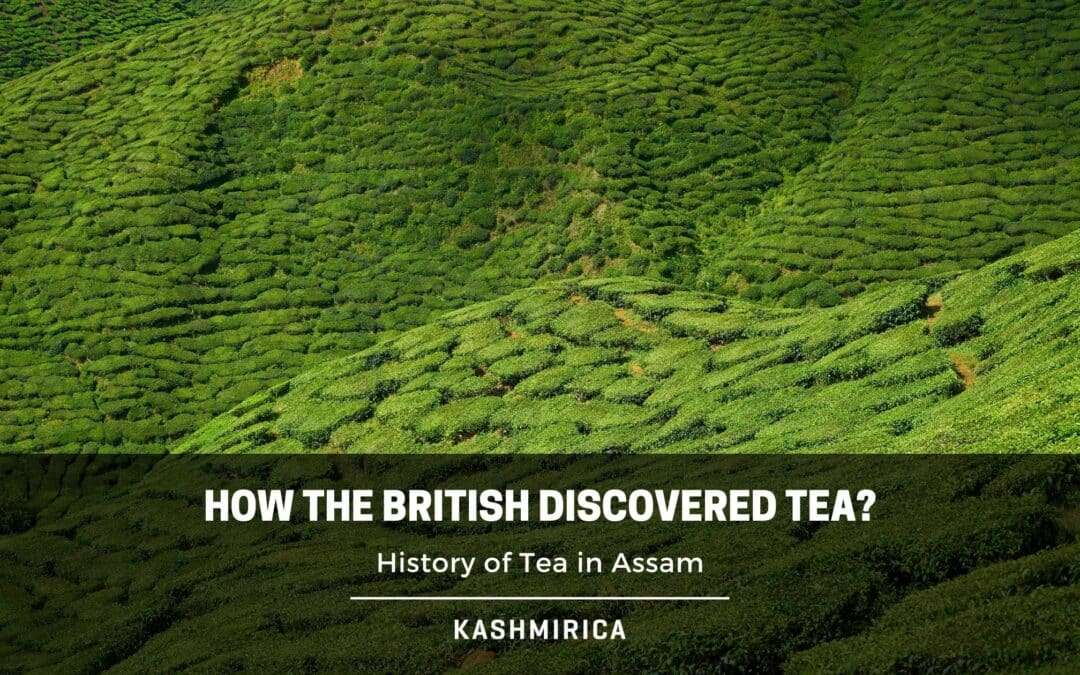 If you’re interested in learning how tea originated in India, you’re at the right place. Assam is not only renowned in India for the magnificent tea leaves it produces, but also around the world.

So, how did tea come to Assam in the first place?

Here is a deeper dive into the origins of tea in Assam.

Origin of Tea in India

It comes second only to water as a beverage as it is known to be native to China, discovered somewhere around 2727 BC.

China is the pioneer when it comes to tea production, and accounts for over 2.5 million tonnes of tea production (around 35% of the world’s total consumption). India is the second-largest producer of tea.

Due to Emperor Shen Nung’s patronage, tea became an aristocrat’s beverage in China, at least that’s how the story goes. Outside of China, the Japanese are known to be the first people to have tasted tea.

The Japanese traveling monks came to China and discovered tea. And as they tasted it, they found it soothing and meditative, so they took back with them tea seeds to plant on their own land.

European traders such as the Portuguese, the Dutch, and the Brits discovered tea gradually while trading with the Chinese. Well, the lesser-known fact is that it was the Dutch and not the Brits who brought tea to the European continent.

A lesser-known fact is that the British were not as fond of tea as they were of Ale until the late 18th century. They adopted tea as their national beverage much later.

There was a lack of safe drinking water which meant that the boiling of water or its fermentation into ale was necessary to make it safe for consumption. For the time, beer served as the staple drink of the poor, but due to bad harvests, the costs of the beer skyrocketed as well.

And then came tea!

It was the wife of King Charles II, Princess Catherine of Braganza who popularised the afternoon tea among the aristocracy class. We can credit her for creating this buzz around drinking tea and establishing it as a status quo.

Due to the high taxes levied by the state, tea was quite expensive and unaffordable for the commoners. Though they were keen to try this new beverage, they could only get their hands on diluted tea. As there was a rise in fondness for tea, smuggling also increased and adulteration of tea started as well. It proved to be unhealthy for the common folk.

Regardless of these difficulties, tea remained a popular beverage, and the famous “Cuppa” was thus born. Over time, the taxes were cut down and more and more people could afford and experience tea. And hence the tea-consuming population increased widely, and people developed a fondness for it.

The Tale of Tea, Opium, and the arrival of the East India Company

Many trading transactions took place between the East India Company and China. Tea was one of the leading exports to Europe. By the beginning of the 17th century, china was already producing 250,000 tonnes of tea and exported around 50% of its total production.

Since the tea was costly, the company would export opium into China illegally, as it was banned in China. But the Chinese soon became addicted to it, and this resulted in two Opium Wars between China and the Brits.

Brits saw the stronghold of China on tea, so they started looking for substitutes. They planned to cultivate tea in the colony of the East India Company, India, and take away the control of the market from China.

The British lacked the expertise and the seeds, to begin with, and they also feared if China started to cultivate its own opium, then the trade relations between them would suffer and the company would suffer from bankruptcy.

Till the early 19th century, only one variety of tea was grown: Camellia Sinensis var. Sinensis.

When the British were looking for suitable lands for tea plantations, Scottish adventurer Robert Bruce went on an expedition to Assam, in 1823.

In Assam, he met an Assamese nobleman Maniram Dewan, who took him to visit the Singphos tribe.

The Singpho tribe is indigenous to the upper reaches of the Brahmaputra valley and the foot of the Himalayas and were the first in the whole region to use wild tea-like plants for their beverage. There is little to no information about the origin of these plants in this area.

The Singpho tribe chief showed Bruce how the local tribes brewed their tea from the wild plants. Bruce was now confident that they had discovered an alternative to overthrowing China from the pioneer producer of tea.

Bruce took with him some tea samples and seeds and planned to examine them in Calcutta for botanical classification. But after a year, in 1824, Bruce passed away. And before dying he told his brother Charles of his discovery.

In the meantime, the company succeeded in smuggling over 80,000 tea seeds from China to be planted in India. They also brought some Chinese farmers to guide them. The company germinated the seeds in Calcutta and planted the samplings in Assam. However, the plants cross-pollinated with the indigenous wild variety, and the whole experiment was a failure.

The then Governor-General Lord Bentick set up the Tea Committee in 1834. It issued a circular about the locations where tea could be grown, and ultimately Assam was considered ideal.

Charles Bruce set up a tract of land in 1836, in Sadiya, Assam, and planted the tea seeds with the wild variety. The plants grew well and with the help of the Chinese farmers, Charles managed to send these manufactured tea samples to the Tea Committee.

He also sent it to Calcutta for botanical classification and was considered a high-grade quality tea by the Viceroy Lord Auckland and other experts.

When the scientific assessment was completed, the species was named Camellia Sinensis variety Assamica. Unfortunately, Rober Bruce didn’t live to see his discovery being identified as a species.

In 1837, Bruce dispatched a batch of 46 chests full of tea of the Assamese variety. Around 350 pounds in 8 chests were sent to London auctions in May 1838. This batch was auctioned on the 10th of January of the following year.

In 1839, Assam Tea Company was the first established one to grow and make tea. By 1862, the company owned over 160 tea gardens, some of which operate to this day.

This new industry brought socio-economic growth, including planters from Britain and laborers from different parts of India, leading to new cultures, traditions, and food habits.

The topography of Assam is so exceptional, that it makes it one of the world’s most abundant biodiversity zones. In the north and south, it is surrounded by the foothills of the Himalayas and the Brahmaputra river runs east through the west.

Assam has a humid atmosphere and witnesses very heavy rainfall. These factors, along with its fertile land, rich soil, and low altitude, fulfill the ideal requirement for tea production. The unique malty taste that Assam Tea is famous for owes its flavor to the tropical climate of Assam.

Assam is now the world’s single largest tea-growing region, and its tea gardens collectively produce over 700 million kgs of tea each year!

These teas are traditionally harvested from March until November. The most significant ones are the First and the Second flush teas, harvested between April to June. The sweeter, and arguably superior ‘tippy’ tea, is produced in the Second Flush. The magnificently shimmering buds of the Tippy Reserve, are unique to the tea plants of Assam, Camellia Sinensis var. Assamica.

Both orthodox whole-leaf tea and CTC (crush, tear, curl) granular teas are produced in the region. If you’ve tasted it, you probably know that Assam teas are renowned worldwide for their bold, brisk, aromatic, malty flavors and intense color. Globally, they are popular as breakfast teas, and in Britain, they’re popular as the afternoon Cuppa.

Remembering the Origins of your ‘Kadak Chai’ Shot

The next time you’re enjoying your breakfast tea or the afternoon Cuppa, remember the trails of tea!

Looking to buy authentic foods from Kashmir? Check Below