Everything that You need to Know About a Kashmiri Pandit Wedding 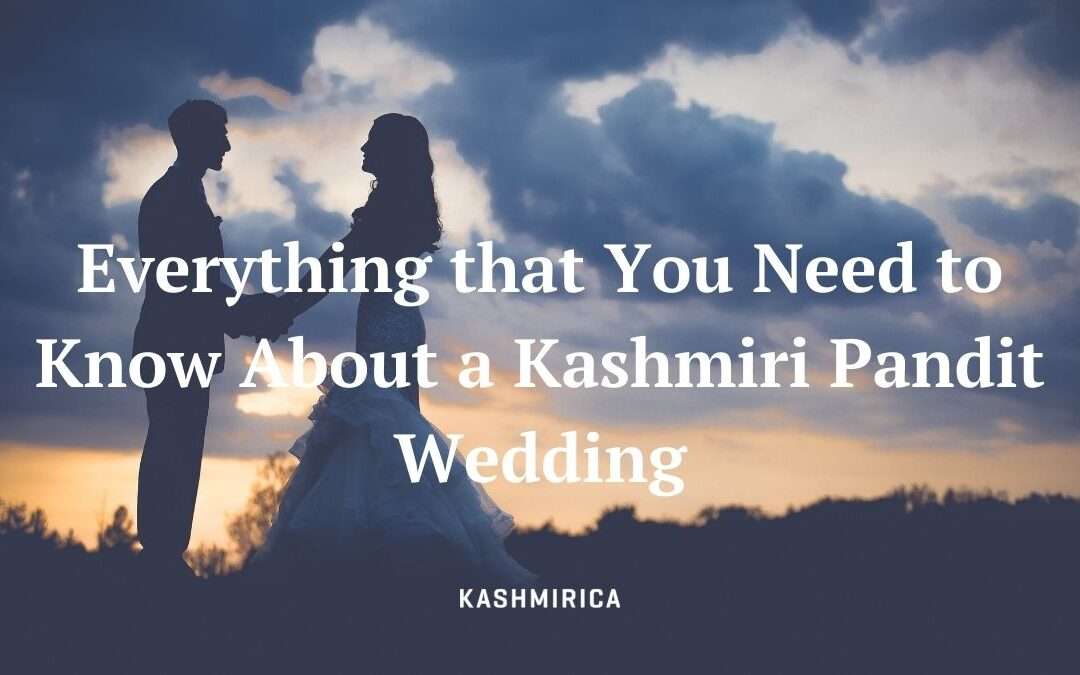 Weddings are fun and auspicious, in every religion, culture, or region. And when we talk about wedding ceremonies of the beautiful valley of Kashmir, a myriad of colorful thoughts cross our minds. Among the many types of weddings in North India, Kashmiri Pandit weddings are one of the most elegant and culture-embedded ones.

Couple these with tradition, delicious cuisine, a picturesque backdrop, and viola, welcome to paradise!

The first and most important step in a Kashmiri Pandit wedding is to match the teknis (horoscopes) of the prospective bride and groom. Other than this, elements taken into consideration even as choosing a match are the status, morals, and background of both families.

All this and extra is taken into consideration much earlier before the Kashmiri Pandit wedding is finalized. The marriage date is proposed by the bride’s parents. As soon as the groom’s parents give their consent, the purohit (priest) fixes the marriage date.

The Kashmiri Pandit marriage can take place in the morning or evening. An auspicious time is chosen after consulting with the purohit.

Let’s get straight into the talk of the main Kashmiri Pandit Wedding Rituals.

Once the families are ready and agree to the marriage, a proper commitment rite takes place in the form of kasamdry. The family priests fix the date of the engagement ceremony in accordance with the Kashmiri calendar. The Kashmiri Pandit wedding ceremony mostly takes place, in a temple, in front of an idol.

Elder relatives from both sides meet in a temple and exchange flowers as a sign of the formalization of marriage. The bride’s family lays out a meal of conventional Kashmiri dishes. Her family also sends coins, fruits, dry fruits, and a pot containing nabad (misri, sugar lumps) to the groom’s house. In recent times, the bride and groom meet in a temple or at the former’s house and exchange rings.

An auspicious day is chosen for the livun – the traditional cleansing of the house before marriage. The bride and groom’s family do not usually perform livun on the same day. This is also the day when the waza (family cook) arrives and puts together a mud-and-brick oven called wuri outside the house. This is where traditional food will be cooked for the Kashmiri Pandit wedding ceremony. Kashmir’s Pandit families do not consume meat, so the wedding cuisine is strictly vegetarian.

Every evening following livun, till the Kashmiri Pandit wedding ceremony, a wanvun (music) session is held in both households, with neighbors and relatives taking an active part in the function. The visitors are served salted red tea, called noon or sheer chai.

The maenziraat ceremony takes place a week prior to the Kashmiri Pandit wedding. It starts with krool khaarun, a rite which involves redecorating doors of the houses of the prospective bride and groom by their aunts (father’s sister). In the evening, the bride-to-be follows a bathing ritual, during which her feet are washed by her maternal aunt.

The eldest aunt decorates her palms and feet with maenz (henna). After this, maenz is distributed among some of the relatives and neighbors. The women invited for this event are served a scrumptious Kashmiri meal by the waza. After dinner, everyone participates in a lively wanvun session. At the groom’s house, a little bit of henna is applied on his hands as a symbol of auspiciousness.

If the janayu or thread ceremony has not been done during childhood for the groom, then it is carried out a few days before the Kashmiri Pandit marriage.

Divagone is a rite that marks the transition of the bride and groom from brahmacharya ashram to grihastha ashram. The bride and groom worship god Shiva and goddess Parvati. The rite is carried out separately for both the bride and groom at their respective houses and all relatives observe a fast before this Kashmiri Pandit ceremony begins. The purohit conducts the ceremony in front of a sacred fireplace.

A crucial part of the rituals is the kanishran. This includes bathing the bride and groom with a mixture of water, rice, milk and curd. Flowers are also showered on them. They step into a new set of traditional apparel following the kanishran. Father and mother of the bride provide her jewelry, clothes, household items, etc. An important object of the jewellery is the dejaharu – an ear decoration that has gold tassels strung on a sacred thread that passes via the middle ear cartilage.

Those holes are pierced inside the ears of all Kashmiri Pandit women when they are two or three years of age. The importance of carrying the dejaharu is that the bride is now ready for her Kashmiri Pandit matrimony.

Women from amongst relatives and neighbors are invited for dinner. It is served in traditional kiln-baked pots called tabche. A modern Kashmiri Pandit wedding does not usually use these pots.

The food prepared by the waza consists of:

The conventional Kashmiri Pandit wedding apparel is the pheran. The bride’s pheran is usually a product of raffle, with ari or hook embroidery on the neck, cuff and edges. Her head is draped in kalpush, a long piece of starched and ironed snow-white cloth. A white scarf, referred to as zoojh, is wrapped over the kalpush. Pins, with black and golden heads, are fitted into her headgear. The complete head apparel is known as tarang. A belt, known as haligandun, with its free ends embroidered, is tied to the waist of the bride.

The groom wears a tweed pheran and jootis in his feet. His headgear is a type of turban called gordastar to which a peacock feather is tied with golden thread. The groom’s paternal uncle helps him tie the gordastar.

A plate of rice containing some money (zung) is touched to the groom’s right shoulder for blessings. Before he leaves for the bride’s house, the groom has to stand on a vyoog (rangoli of sorts). He is given nabad and a conch shell is sounded to announce his departure. Two rice pots with some money are given to the poor as a gesture of goodwill.

On arrival of the Baraat or Kashmiri Pandit wedding procession, the bride’s family greets them warmly by blowing a conch shell. Fathers of the bride and groom exchange jaiphal or nutmeg symbolizing solemnization of their relation with promise of a lifelong friendship. The bride is made to stand on a vyoog and the eldest female relative or the bride’s mother performs puja with lamps made from wheat flour. She feeds nabad to the bride and groom. Two rice pots are given away as alms. The couple is led by the purohit to the door. Then, he carries out a small rite called dwar pooja before leading them to the lagan mandap.

Guests are served kahwa accompanied by a vegetarian meal with as many as 21-25 dishes prepared by the waza. Those dishes include delicacies like marchwangan pokore (chilli pakoras), madur pulao (sweet pulao) and shufta (crafted from paneer, fried with nuts and sweetened with sugar) in addition to the ones mentioned before.

The priest performs the lagan rituals in front of a sacred fire. For the first time, the groom and bride see each other through a mirror. This Kashmiri Pandit wedding custom continues to thrive even now. After the groom and bride see each other, they hold hands till the Kashmiri Pandit wedding ceremony is complete. Their palms are tied with a cloth. This, in Kashmiri, is called athwas (handshake).

The bride and groom then compete to find their engagement rings from inside a bowl of milk. As per Kashmiri folklore, the first one to pick out the ring would be the dominant one in the marriage.

Then a mananmal, golden thread, is tied to the bride and groom’s foreheads. The left foot of the bride and groom are positioned on a kajwat or grinding stone. The first phera around the sacred hearth is made by the bride stepping on seven one rupee coins, putting her right foot forward and at the end of it, she is received by the groom’s father. There are a total of 7 pheras. The marriage ceremony is concluded with a vegetarian dinner and the bride and groom are made to eat from the same plate.

At the end of the rituals, the bride and groom sit on a high pedestal. The newly-weds are treated as Shiva and Parvati and worshiped at the time of posh puza. Every relative offers them flowers while chanting Vedic mantras for blessings.

Then the newly-weds have to stand at the vyoog as the eldest female relative from the bride’s family offers them nabad three times and kisses them on the forehead.

As the bride leaves her parent’s residence, she throws a fistful of uncooked rice over her shoulder. This, in a Kashmiri Pandit wedding, symbolizes that prosperity will continue to remain in the house as the bride leaves. The bride carries some extra rice in her hand that is to be scattered at the doorstep of her new home. This symbolizes prosperity for her new home.

After the couple reach the groom’s house, they stand on a vyoog and have nabad, offered by the groom’s eldest aunt or mother. The mananmal tied on the brow of the couple are exchanged.

After a meal, the bride changes into a new dress and jewelry given by her in-laws. Ataharu, which includes numerous strands of gold/ silver tassels, are strung below the dejaharu which the bride is already wearing, signifying that she is now a married woman.

During satraat, the bride and groom visit the former’s family where they are showered with gifts of money, dry fruits, and a dusa (a six yard pashmina scarf) for the groom.

Phirlath is their second visit to the bride’s home.

Then on a Saturday or Tuesday after the wedding, the bride’s parents send a roth (a traditional, freshly baked cake adorned with nuts), to their son-in-law’s family. This is the Roth khabar. The bride is given salt as shagun.

Gar atchun is a reception-type function organized by the bride’s family for their son-in-law and his relatives. Varieties of delicacies are prepared and the bride is dressed in beautiful clothes and jewelry.

This marks the end of a Kashmiri Pandit wedding ceremony and the beginning of a blessed life for the couple and their families.

You can also buy a variety of Kashmiri Products from our online store such as Honey, Shilajit, Almonds, Walnuts, Apricots, and similar Kashmiri Foods, we have got you covered. From Wazwan to spices, we have the finest version of everything.