Lal Ded: The Mystic of Kashmir 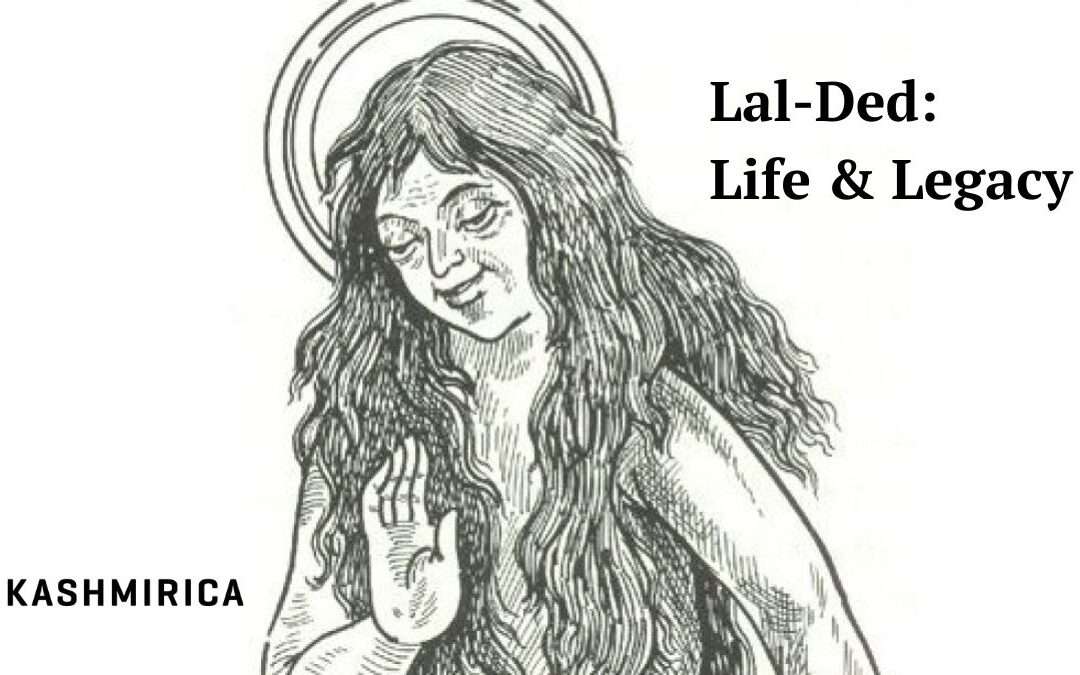 Fondly called as Lad Ded (Mother Lalla), Lalleshwari was a 14th century Kashmiri mystic and poet. She was the creator of Vakhs, a kind of poetry. A revolutionary mystic of her time, Lal Ded’s verses are some of the earliest Kashmiri compositions and form an integral part of the Kashmiri literature.

Also known as Lalla or Laleshwari, Lal Ded was an ardent devotee of God Shiva. She also often used her poetry to engage with Shaivism and Sufism. Lal Ded’s verses have come down from generations to generations through the folk tradition of Kashmir and perhaps there isn’t a single Kashmiri who hasn’t heard of her.

Lalleshwari was known to be Kashmir’s rebel poetess for she challenged the ideas of caste system, social and religious discrimination and rejected conventional society.

In this article, we get to know more about this poetess whose verses are deeply rooted in Kashmir’s culture even today.

She was born sometime around 1320 to 1355 in Pandrethan in Kashmir as ‘Lalleshwari’, in a Kashmiri Pandit family. Later on, she came to be known by many names including Lalla Arifa, Lalla Yogishwari, Lalla Yogini, Laleshwari or simply Lalla. However, Lal Ded is her most recognizable and most commonly known name.

After being briefly educated in the religious texts, she was married off at the age of 12 into a family that regularly mistreated her. Her mother-in-law treated her cruelly and spoke ill of her to her husband. Lalla’s mother-in-law is known to have put stones on her plate of food and then covered it with rice. Even when she was not given proper food and always remained half-fed, Lalleshwari is known to never have complained.

Every morning, Lal Ded left the house to fill a pot of water from the river and wouldn’t return until it was evening; in-between, she spent her time at Lord Shiva’s temple on the other side of the river.

Soon, she found her guru in Sidh Srikanth and pursued yoga under him. And when she turned around 26, Lalla renounced her marriage and material life to become a mystic. Having given up all her possessions, she would wander around naked or in rags, chanting her verses.

Laleshwari openly questioned the elite and unassailable Sanskrit academia. It was her unprecedented courage to renounce a conventional life that made her rebel against the tradition and yet, a significant contributor to the Kashmiri culture.

Interestingly, Lal Ded most probably never saw herself as a poet. In fact, her words were merely mantras or chants that were aimed at praising God. It was her power to impact others that her listeners formed her sayings into chants and mantras. Before her Vakhs came to be published, they have been orally passed down from generation to generation in Kashmir.

She used the first person in her vakhs and also used her names quite frequently. Like, ‘I, Lalli’ or ‘I, Lal’ were commonly used by her.

Lal Ded’s Vakhs will take you on a beautiful journey through the disillusionment of the world, the distress of the man, a search for God and finally, the realization of the highest truth. Her vakhs not only show her poetic genius but also depict her mystic experiences.

Although her vakhs are quite personal, the lessons taught by them are universal. Although profound, her humanism makes it easy to relate to Lal Ded’s verses. Thus, her work is timeless and resonates with different people.

These verses are deeply embedded in Kashmir’s culture. Generation after generation and century after century, her verses have been preserved in collective memory, in songs and in proverbs and hymns in the valley.

Her vakhs have played a very important role in shaping the Kashmiri language and literature. In one of her well known vakhs, she emphasizes on the fact that there is no distinction between the people of different faiths. In many of her verses, she even defied the patriarchal authority of the Guru.

One of her most significant contributions include bringing the difficult Shaiva philosophy from the confines of Sanskrit-knowing scholars to the wide spaces of the common Kashmiri-knowing people. While translating these highly evolved yet subtle concepts along with her mystic experiences into a language widely known by the masses, she not only made them easily accessible but also enriched the Kashmiri language. She successfully explained ideas and experiences that would otherwise be unreachable to the ordinary people.

Her easily recitable verses in the mother tongue made her vakhs secure a place in the collective memory of the Kashmiris.

While the beginning of Kashmiri literature is often debated, one thing is for sure- the credit for the revival of the Kashmiri dialect is owed by Lal Ded.

Lala Ded and Her Popularity

Lal Ded’s openness and her understanding of the genuine problems of the common people is what made her so immensely popular among millions.

Even today, almost every Kashmiri, irrespective of whether he is Hindu or Muslim, literate or illiterate, is able to recite some of Lal Ded’s Vakhs. Her name in the valley is said with utmost pride, admiration and respect.

Her poetry has also been widely translated including English translations in ‘Women in Praise of the Sacred: 43 Centuries of Spiritual Poetry by Women (1994)’ , ‘Naked Song- Lalla (1992)’ and a lot more.

After having lived most of her life as a mystic and inspiring others, Lal Ded died sometime during the late 14th century.

All in all, Lal-Ded was a wise woman and a genius poetess with an un-shattering faith and confidence made her leave a mark on the world. By knowing more about her, there is no doubt that her contribution to Kashmiri language, culture, tradition as well as heritage is truly commendable. In fact, it is also often said- ‘Lalla is to Kashmiri what Shakespeare is to English’.

You may also read: