The Story of Shahtoosh: World’s Most Expensive Fabric 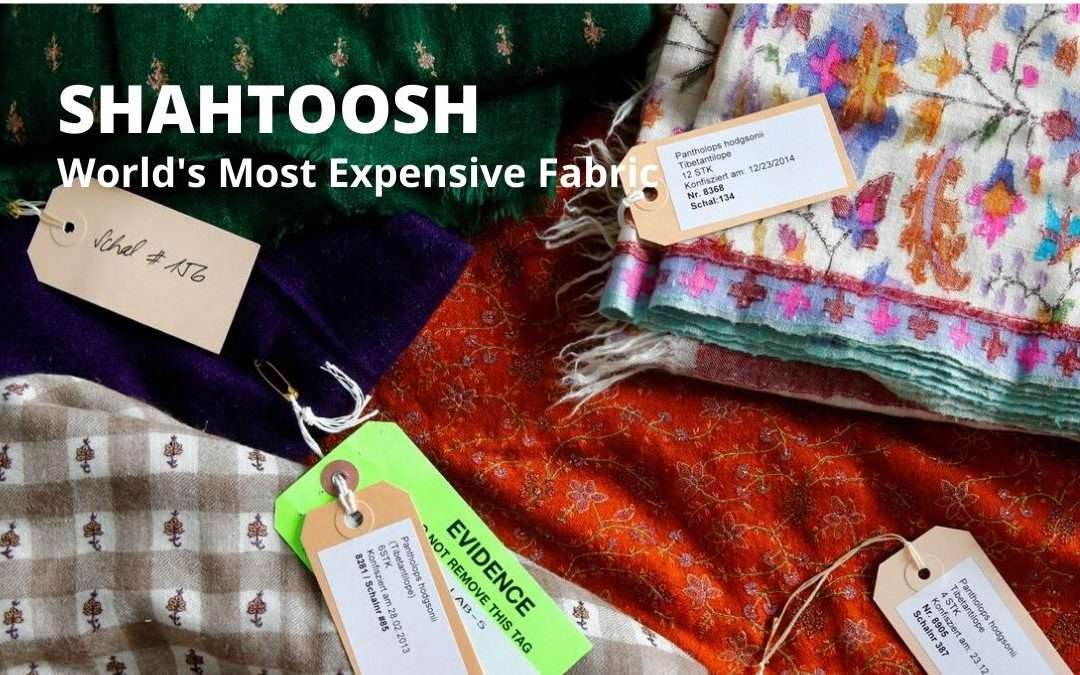 Shahtoosh or shahtush or simply toosh, is a type of luxury shawl made from the most expensive fabric in the world. It is a Persian word that literally translates to ‘king of fine wools’.

NOTE: Buying & Selling of Shahtoosh is illegal. We do not sell or buy this fabric. This post about Shahtoosh is purely for information purposes.

This super soft and super warm shawl is handwoven in the valley of Kashmir. To own a shahtoosh scarf or shawl is to lighten your pockets by several thousand dollars! And a few decades ago, people happily did so.

But, what is it that makes this shawl so exquisite? That at one point, the most elite of the elite class of not just India but also the US as well as other countries boasted to have owned at least one of these; before it became illegal to own one.

Right from supermodels and actresses to other celebrities- the shahtoosh scarf was a prized possession among them all.

Now that we have an idea about the world’s most expensive fabric, let’s delve deeper and see what all the fuss is that surrounds this type of shawl and what makes it so special.

Shahtoosh is the finest quality of fabric that is known to man. Each of its fibres is only about 7 to 10 microns and it is considered to be one-sixth of that of a human hair. This fabric is used to make luxury shawls and scarves, popularly known as shahtoosh shawls.

The fabric is procured from the underfur of a species of Antelope; locally called the ‘Chiru’. The antelope is native to the Tibetan plateau. Chiru is a migratory animal that lives at super-high altitudes of about 5,000 meters and develops the ‘underfur’ in order to survive the extremely cold and harsh weather conditions.

Back in the day, when shahtoosh shawls were legal, poachers would hunt down the Tibetan antelope and slaughter it to obtain its fur.

What is a Shahtoosh Shawl?

A shawl that is made using the shahtoosh fabric is a shahtoosh shawl. This shawl is super popular throughout the world for its warmth, comfort, and softness. It was once an object of desire for people across the globe. People have claimed to be addicted to the impressive beauty that it has and have described it as ‘nothing else in the world’.

For decades, Kashmir has been the only place where this shawl is expertly manufactured. In fact, expert weavers had careers dedicated only to weaving these shawls.

The Origin of Shahtoosh

The origin of the shawl is believed to date back to the 16th century, during the reign of Mughal Emperor Akbar. It is believed that he had a great passion for these shawls and was the owner of quite a few of them. In fact, shawl factories flourished and became a major source of income in Kashmir during the Mughal rule. That is, interestingly, also when the wool received its name -‘Shahtoosh’.

Until Shah Jahan’s rule (1666), the toosh shawls were reserved for use only by the royals. Later, with changing times, the shawls became accessible to the commoners as well. The shawls soon gained popularity and became a status symbol for the elite class around the world.

Thus, the trade of the shahtoosh began and influenced the market for a long, long time. These were also traditionally gifted at weddings back in the day.

Basically, there are three types of this shawl. The types are categorized by the fabric used. They are:

How Long Does it Take to Make a Shahtoosh?

The shahtoosh shawls are only handwoven by the master artisans of Kashmir. The weaving of this shawl is a traditional art and many weavers are only dedicated only to exclusively weaving these shawls. The shawls are traditionally woven making the use of handlooms.

Since the fabric is super fine, machines cannot be used and everything needs to be done using hands. As a result of the extensive process, it takes a weaver anywhere from a month to a year to craft a single toosh shawl.

What makes the Shahtoosh so Expensive?

Every process right from obtaining the wool to manufacturing a shawl is done using the hands by amazingly skilled craftsmen.

But, this isn’t the only reason why the shahtoosh is so expensive. Another factor is its majestic feel. The fabric is so super soft that it is incomparable with any other kind of fabric. It is known to give its owner a taste and feel of royalty.

The shawl is extremely lightweight that it can be passed through a wedding ring! It is so light that you can hardly feel anything around your shoulders. Not just its lightness but its warmth is incomparable too. Legend has it that the shawl is so warm that it can be used to hatch pigeon eggs.

The majestic appeal, feel and warmth of the shawl have made celebrities and other rich people around the world pay thousands of dollars to own this beautiful garment. Some celebrities became so addicted to these shawls that they have been reported to have owned multiple pieces.

Some even claim that the shawls became so dear to them that they would never leave the house without their favorite shawl.

The scarf costs lakhs of rupees. It would be generally around 3-10 lakhs in cost. Saying that it is banned and illegal to buy and sell shahtoosh. While a toosh shawl combined with pashmina costs less than a pure toosh shawl, it is still quite expensive.

The price went almost double for buying a toosh shawl at places like the US and Europe.

Why is Shahtoosh Wool Banned?

The UN Convention on International Trade in Endangered Species of Wild Flora and Fauna (CITES) banned the trade of the Chiru wool products in 1975. It was banned globally in 1975.

The Indian government put a ban on the trade of Shahtoosha in 1991. Then, the J&K government announced a ban on the manufacture and trade of the Shahtoosh wool in the early 2000s. After several court hearings and many years later, the law was finally enforced.

Around 20,000 Tibetan antelopes or Chirus needed to be killed every year for the production of the toosh shawls. As a result, their population declined significantly. From around a million antelopes, the number came down to approx 75,000 by the end of the 20th century. The Chiru became an endangered species. All these reasons contributed to the ban of the Shahtoosh trade.

The sale and possession of a shahtoosh shawl is now illegal in most of the countries and is a punishable offence.

The Chiru population has now stabilized and is thought to be increasing. Almost 15,000 people had been employed in the trade when the shahtoosh wool was legal.

The livelihood of thousands of families depended on the Shahtoosh wool trade in Kashmir. The weavers were later provided with other alternative ways of earning. But they are rather insignificant.

Since so many people depended on the trade, a parliamentary panel requested that the ban on the Shahtoosh wool trade be lifted to revive the industry as well as the employment opportunities. The traders welcomed this proposal with open arms. However, the request was not accepted and the trade of Shahtoosh shawls still remains illegal.

Any person who infringes the law can be subjected to a hefty fine and may also be sentenced to several years in jail.

‘Shahtoosh’ is now a word that is talked about with much hush. But despite the ban, the demand for the toosh shawls and scarves still remains high in various western countries.

Although we don’t know what the future holds for the Shahtoosh Shawl, a great alternative to the Shahtoosh is the Pashmina Shawl – one of the softest, warmest and lightest shawls in the world which is legal as well.

Buy the finest Pashmina Shawls from us at Kashmirica.