The State of Saffron in Kashmir 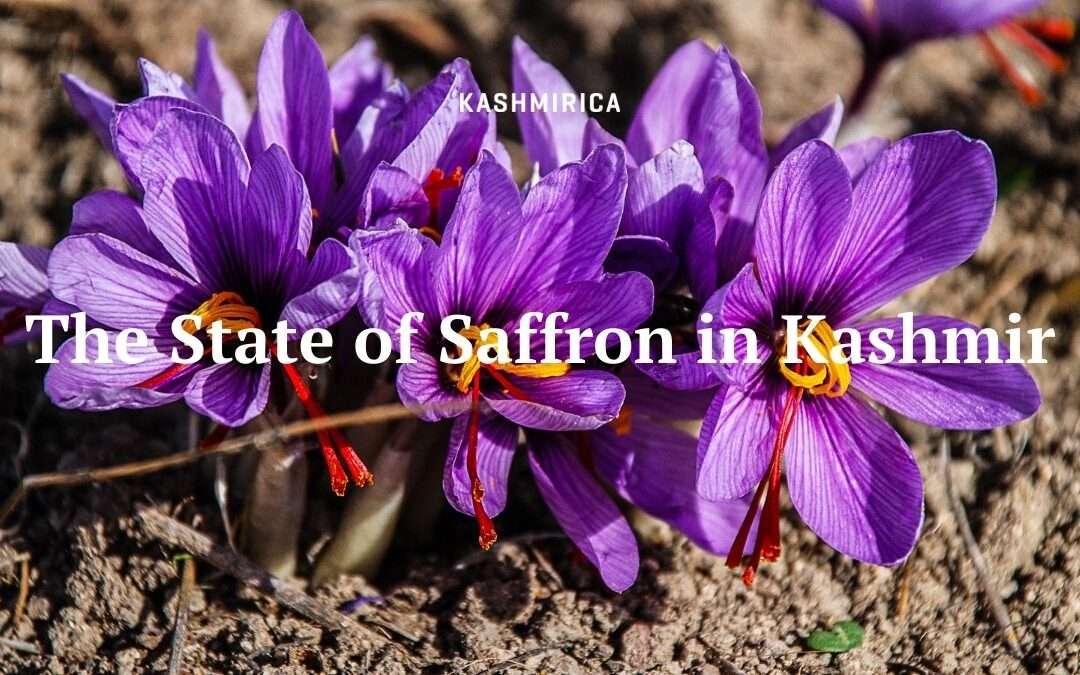 There are several ancient stories that suggest how saffron in Kashmir actually came. One legend suggests that it was back in the 12th century when Sufi saints Khwaja Masood Wali and Sheikh Sharif-u-din were traveling through Kashmir. It was them who presented the local chieftain with a bulb of saffron for curing them of an illness. While another suggests that it was actually the Persians who brought it with them to grow their trade and market in Kashmir in the 500 B.C.

Even though the stories of its origin in Kashmir may be discordant, one thing is for sure- Kashmiri saffron, with its superior taste and quality, is a very precious spice. It is in Pampore where most of the Kashmiri saffron grows. As compared to its other counterparts, Kashmiri saffron or Pampore saffron has thicker and more aromatic strands.

The Kashmiri farmers who grow this most expensive spice in the world, would have their spice sell for as high as 450,000 INR or $3,400 for a kilogram as it was once a booming industry. A few decades ago, it would take a family about 6 to 7 months to pick and package their saffron in Kashmir.

According to a local whose family is involved in the saffron business, the yield of the saffron crop has gone down drastically over the last few decades. Her family that would be able to harvest some 400 kilograms of saffron a year some 30 years ago, harvests less than 10 kilograms a year now. And the same is the story for the other Kashmiri saffron farmers as well.

The business of saffron in Kashmir that has been running in families for several generations is at one of the lowest recorded in history today. A task that would once take months at a stretch to finish now only takes one.

The ongoing violence, climate change, droughts and other factors have taken a severe toll on the saffron industry of Kashmir.

The Story of Saffron in Kashmir

Pampore, a town just a few kilometers away from Srinagar is popularly referred to as the ‘Saffron Town’. Here, the process of saffron farming begins in April and the soil is ploughed twice so that the moisture seeps in. The saffron corms are then sown in August or September and the soil is pulverized. By the time it is mid-October, the saffron plants begin to sprout and about a month after that, they are picked, dried, and sorted.

The petals of the saffron flower go into making medicine, its yellow strands aren’t of much use and the red strands in the middle are actually the pure saffron strands. Each of the saffron flowers has only three strands of saffron and for a kilo of saffron, about 150,000 flowers are needed. That is one of the reasons why the saffron price is so high, making it the most expensive spice in the world.

Use of Saffron in Cooking

Known as Zaffran in Urdu, kesar in Hindi and Kong posh in Kashmiri, saffron is extensively used in cooking. The Mughals who took saffron wherever they established their court are known to have popularized its use. The use of saffron as a color as well as scent in the royal kitchens became very common. It was commonly used for making biryanis, lamb stew and in breads like sheermal.

Saffron’s use in sherbets, phirnis as well as other sweet recipes became quite prominent too. Today, whether it is traditional preparations like the Wazwan or modern dishes at cafes, saffron has created a niche for itself in the culinary world.

It is believed that saffron’s presence in Kashmir dates back to as early as the 5th century. The Kashmiris would drink saffron-infused milk to break their fasts during Ramadan and even celebrations would be marked by using saffron in the modur pulao and topping some saffron on yogurt. Saffron, as a spice, is always used as a novelty and it is not really something that is used for everyday cooking.

Along with playing a very crucial role in various dishes of the traditional Kashmiri meal of Wazwan, saffron’s important presence for Kashmiris is also in the kahwa, the Kashmiri indigenous green tea. The kahwa’s deep golden color is an ode to the local saffron grown in the valley.

The Kashmiris also take immense pride in their saffron and believe it to be a feeling rather than a food.

The Struggles of Saffron in the Valley

The presence of saffron is deeply rooted in the valley of Kashmir. However, ecological reasons like drought and lack of irrigation have robbed Kashmir of its beloved saffron. Climate change has led to the soil becoming dry and unsuitable for growing the crop.

With a production of around 16 metric tonnes of saffron in the late 1990s, a severe drought caused it to dip down to just a mere 0.3 metric tonnes in 2001. The next 13 years saw an average yield of about 8.71 metric tonnes.

Since the yield for saffron is so low, the land used to grow it has become less valuable. As a result, a number of farmers have begun to abandon their lands.

Iranian saffron has also entered the region and due to the low saffron price for that saffron, it is also often sold in the name of Iranian saffron.

However, despite all the challenges and struggles, thousands of families in Kashmir are associated with the saffron industry today.

In order to revive the industry and bring it back to its former glory, several measures are being taken by the government. ‘National Saffron Mission’ was launched by the central government in 2010 to revive the production of the most expensive spice in the world in the valley.

Several individual organizations too are working hard to save and promote the saffron industry of Kashmir and to carve a prominent place for it on the world market.

If you wish to buy pure Kashmiri Saffron, Honey, Shilajit, Almonds, Walnuts, Apricots, and similar Kashmiri Foods, we have got you covered. From Wazwan to spices, we have the finest version of everything.