Know Everything About the Traditional Kashmiri Dress & Style 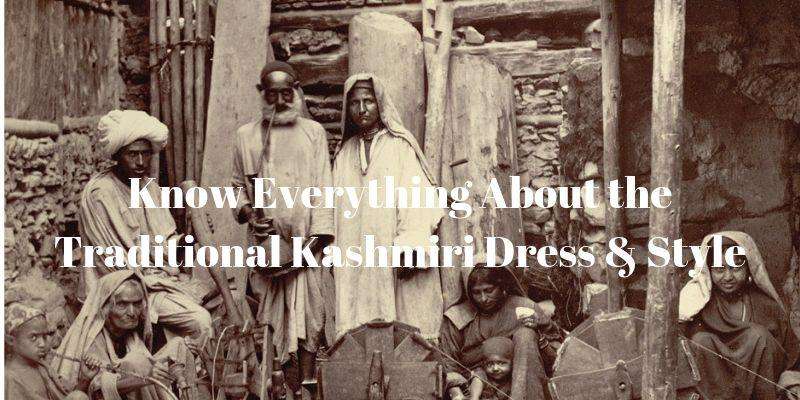 Not only are the different Kashmiri dresses known to the tourists coming to Kashmir, but they have been showcased time and again in many Bollywood movies such as Kashmir ki Kali, Jab Jab Phool Khile, Rockstar, and more recently in Laila Majnu.

Hence, the world is no stranger to the customs and traditions of the Valley of Kashmir.

There are some intricacies about the culture and the ethnic clothing of Kashmiris that will tell you a lot about the history and the culture of the people of Kashmir. Kashmiri traditions, the dressing, the language, and the preferences make a vivid picture of how Kashmir connects to the rest of the world.

That’s also the way in which we get to know, how Kashmir and Kashmiris set themselves apart.

Today, I am going to narrate to you another bulletin on Kashmir. It is the story of Kashmiris and their dressing sense. Their clothing and fashion. So, hold your breath and enjoy some information on the traditional Kashmiri dress & style.

When we talk about ethnic Kashmiri apparel, it is exactly what you think it is. A traditional kurta and salwar for men actually called the Khan Dress. In the rest of India, it is famous as a pathani.

Women on the other hand wear Salwar-Kameez donned with a dupatta. The hair of women is usually covered with a headscarf. In the winters, women tend to wear a pheran along with a Pashmina Shawl.

You would know about a Salwar Kameez, but you must be thinking about what a pheran is. Pheran is a long garment worn both by men and women that covers the entire body up until the knees. Both men and women are known to wear the pheran, and it’s a dress even used by the kids.

Pheran may have a cap, similar to a hoodie or not. And a pheran comes in various forms depending upon the use it will be put to. So, there are pherans for casual daily wearing, others for formal wear and there are varieties that are meant for weddings.

Although movies do exaggerate showing short shinning waistcoats and pointy skull caps, which in reality are only worn when you have a fancy dress competition to win.

The Preferred Traditional Kashmiri Dress of a Woman

The Kashmiri dress for women be it Muslim or Pandit is completely the same. But there is a difference in the kind of jewelry each of them prefers to wear. Whereas most of the women in India have sarees as their traditional dress, Kashmiri women have a completely different style.

Kashmiri women have traditional dresses similar to that of Afghan and Persian women. The style and making of the Salwar-Kameez and the jewelry are very similar to the attire donned by the Pashtun women.

The Salwar-Kameez is further beautified by a fancy pheran, as already stated. Now when I say pheran don’t get confused thinking that a pheran is for wearing in winters only.

Pherans are used to cover the bodies. They were worn  by Kashmiri women over the centuries to cover their bodies as a sign of modesty. The pherans worn in summer are made out of light fabrics in accordance with the heat.

Next comes the headscarf. It is like a cherry on top of a cake. Without a scarf, any outfit is not complete. At least in our estimation. Interestingly, it is worn by both Muslim and Pandit women. It can be worn by either tying it to the head or letting it stay open. A scarf is called Kasaba or the Taranga by Kashmiri Pandit women. They wear it in a peculiar manner. It is tied to the hanging bonnet and falls up to the heels from behind.

Traditional Kashmiri Dress for the Man

For men, the traditional Kashmir outfit is a Khan Dress topped with a short Sadri (waistcoat). In the past, they also used to wear a long full-length outer robe with long bell sleeves which are called the Chogha. Older folks wear it with a girdle around the waist. A headgear was also worn in older times. It was like a turban made by a small fitted cap covered with a cloth.

The manner of tying the cloth varied among the Pandits and the Muslims. Sometimes, on special occasions such as marriages, the turban of a Muslim man resembled that of a Pathan man. In medieval times rich upper-class Kashmiris wore silk on festive occasions.

The footwear consists of shoes made of grass called Pulharoo and sandals made of wood called Khraw. But this is talking about 5-7 decades ago. Today, with Globalization, Kashmiris wear whatever the world wears, but they still like to done their tradition.

Talking about the Kashmiri Dress in Winters

I am going to mention the pheran in detail now. I love the pheran, O’, yes I am!

The winter in Kashmir can give full-fledged competition to the climate in Siberia and Antarctica. The temperature can go down to -15 degrees Celsius.

We Kashmiris tend to be prepared for it. In all honesty victory over such a climate requires complete preparation. In the past, people used to prepare for it months in advance.

Pheran is the first item that comes to mind when someone talks about winters in Kashmir. Yes, the Pehran!

It is something that Kashmiris love and deem to be heritage. It is an all-rounder garb that acts as a sweater, a jacket, an overcoat, and even a blanket. The star of the Kashmiri customary dresses, it has become a mark of identification for Kashmiris around the world.

This woolen wonder has saved Kashmiris from crippling harsh winters which have to be tolerated without electricity in some areas. The only source of heat is the Kangri which is tailor-made for pehrans. Once you have a Kangri under your pehran, the winters just seem like any other season.

Btw, a Kangri is a fire pot.

The women folk wear the pherans in a much more fashionable way. It is not just a winter garment but also centuries-old customary clothing worn also for every special and important occasion. This is the Kashmiri dress that is famous the world over, not as much as the pashmina though.

The simple pherans worn at home have simple embroidery and designs. But those worn for during special occasions are ornamented with attractive tilla works and special embroideries crafted with special gold threads making them worth thousands of rupees in the market but priceless in the eyes of a Kashmiri.

The Summer Dress of Kashmir

In summers, Kashmiri people wear the lighter versions of their traditional outfits. Although ever since modern times popularized global fashion in the valley, our clothing has drastically changed. It has paved the way for western wear to penetrate into the market, but even then the evergreen and ever-comfortable ethnic summer wear hasn’t been written off the valley yet.

The younger women wear Salwar-Kameez in summers with light duppattas whose making can be inspired from either side of the border. The older women prefer to stick to their traditional roots and wear clothes made in the conventional Kashmiri style.

As I stated earlier, the Kameez-Salwar is topped by a light pheran to cover their bodies fully for modesty and crowned with a Daejj (Head Scarf).

Similarly, men also tend to experiment with modern styles nowadays. They prefer to wear pants and jeans with shirts winning the battle of the trends. But when comfort weighs more than show off traditional wear wins the war every time.

The customary Khan Dress is usually made in the Pathan style which can be sometimes topped with a waist coat adding to charm and elegance. The kurtas vary in sizes and shapes, they can be short or long and with our without a collar.

Also, they can be either typical salwars or pants like salwars. Some men wear trousers or jeans under them. Not only is the Kashmiri dress comfortable, but it’s also elegant and stylish.

The traditional Kashmiri jewelry is creativity and mystic art at its best. Every piece of the jewelry blends beautifully with the apparel and adds to the charm of the outfit donned.

Kashmiri ornaments are typically made of gold and silver and are studded with multi-colored stones or pearls. Kashmiris love birthstones. Some people say that Kashmir is the land of the blue sapphire as well.

The well-known and frequently worn jewelry pieces in the past were Jiggni and Tikka. They were worn on the forehead. They can be triangular, semi-circular, or circular in shape depending on the use and occasion.

Atta-Hor (earpiece) was usually worn by the Kashmiri Pandit women. It hangs over the head of the women on either side and is connected by a chain over the head.

They are a mark of their matrimony and are worn at all times by them, especially during festivities and weddings. Finally, Kana Vaji is studded with turquoise with a fringe of hanging gold leaves and balls.

That’s all in this bulletin. I have told you everything that you would need to know about the traditional Kashmiri dress. You may know that roots of the Kashmir ethnicity are a mix of several civilizations. Thus, with every piece of clothing, you can see different cultures being beautifully merged among one another. Doesn’t that create a magical blend of many rich customs, arts, and traditions?

To summarize, Kashmir is an offspring of Central Asia, Persia, Arab, India, Pakistan and Afghanistan and you can visit all these countries at once by simply visiting Kashmir.

You May Also Read:

Buy some awesome women’s clothing from us. Explore some samples below.