The Life & Legacy Mirza Ghalib – All You Want to Know 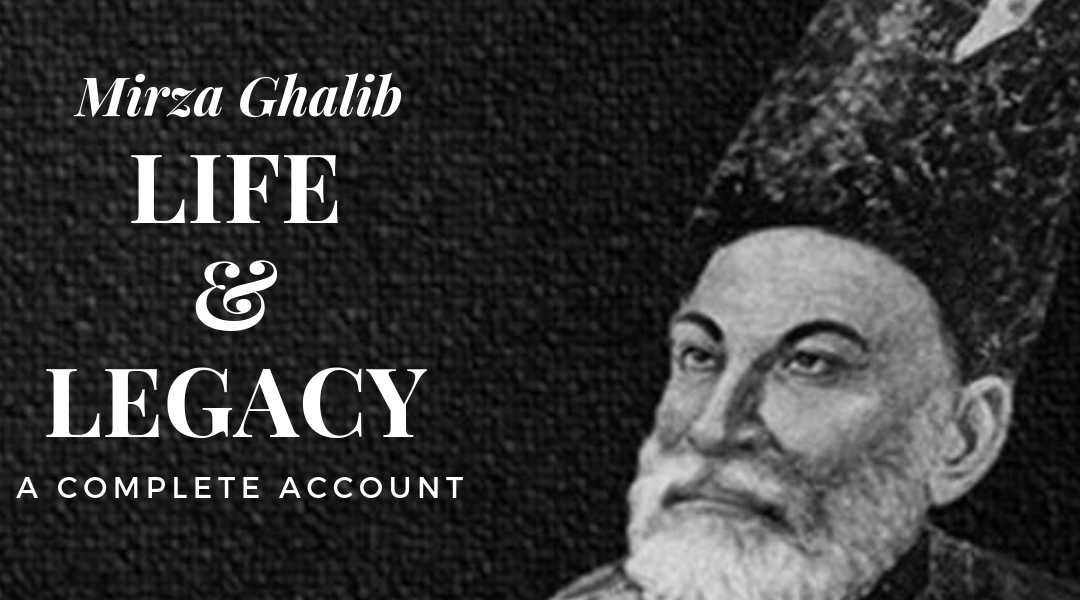 I was introduced to the amazing works of Mirza Ghalib in my school. As a child, I used to study the Urdu language and that’s when the names and works of some awesome people like Ghalib from the world of Urdu were introduced to me.

This opportunity to be able to know some of these great personalities ignited a passion in me. The passion was to study Urdu poetry & literature in depth! And thankfully this passion has not died ever since.

I am writing this blog post to give you a complete insight into the life of Mirza Ghalib. The life of a magnificent poet. A poet forgotten!

Honestly, the lives of some of our venerated Urdu poets have been lost and are in a dire need of a rebirth, at least in mention.

Who was Mirza Ghalib?

Mirza Asadullah Baig Khan, widely known as Mirza Ghalib / Mirja Ghalib or simply Ghalib was a conspicuous Urdu and Persian poet. He lived during the last years of the Mughal Empire.

Due to his marvelous abilities as a poet both in Urdu & Persian, he was given a number of honorific titles. Some of those titles are Dabir-ul-Mulk, Najm-ud-Daula and Mirza Nosha.

Some academics have regarded Mirza Ghalib as the last great poet of the Mughal Era. He is also considered from the pioneers who transformed the Urdu language.

Mirza Ghalib was born on 27th December 1797 in Kala Mahal, Agra into a family descended from Aibak Turks who had moved to Samarkand (Uzbekistan). His paternal grandfather, Mirza Qoqan Baig, was a Seljuq Turk who had immigrated to India from Samarkand during the reign of Ahmad Shah. After his migration to India, Ghalib’s grandfather worked throughout the country including in cities like Lahore, Delhi and Jaipur. But destiny made him to finally settle in Agra.

A Tribute to Mirza Ghalib

On a side note, like all other great men like Iqbal and Sanullah Amritsari, Ghalib had roots in Kashmir too. That makes me wonder if greatness is a Kashmiri thing. And I love to joke!

Coming back to the discussion, when Ghalib was a little over 5 years of age, his father died in a battle. This grief-filled year was 1803. He was buried in Alwar. Mirza Ghalib was then raised by his Uncle Mirza Nasrullah Baig Khan.

Mirza Nasrullah Baig Khan was the governor of Agra under the Marathas. The British appointed him as an officer of 400 cavalrymen, fixed his salary at Rs.1700/- month, and awarded him two Parganas in Mathura. When he died in 1806, the British took away the Parganas and fixed his pension as Rs. 10,000 per year.

He was linked to the state of Firozepur Jhirka (present-day Mewat, Haryana). The Nawab of Ferozepur Jhirka reduced the pension to Rs. 3000 per year. So, Ghalib’s share was Rs. 62.50 / month.

A Sneak Peak into Ghalib’s Career

Mirza Ghalib started composing poetry at the age of 11. Although his first language was Urdu, Persian and Turkish were also spoken at home due to his ancestry. Apart from Urdu, he received an education in Persian and Arabic at a young age. When Mirza Ghalib was in his early teens, a tourist from Iran Abdus Samad, who had recently converted to Islam from Zoroastrian, came to Agra and stayed at Ghalib’s home for two years and taught him Persian, Arabic, Philosophy, and Logic.

He had written most of his famous ghazals by the age of nineteen. That’s too young for the quality and depth of his ghazals. At that time ghazals were written mostly to express love, pain and sadness. But Mirza Ghalib had different ideas.

He revolutionized this genre and expressed philosophy and the struggles and mysteries of life. Mirza Sahab wrote ghazals on many other subjects, vastly expanding the scope of the ghazal.

At that time the Urdu language was very decorative and formal.  But the genius in Mirza Ghalib made this language very familiar and relatable. This is most notably seen in the letters that he used to send to his friends. These letters were filled with humor and wit.

Letter writing subsequently became an art which he mastered. His letters were written in a first-person narrative and seemed like he was conversing with the receiver in person. These letters were very informal. He would just write the name of the person and start the letter.

His style was revolutionary and he gave letter writing a whole new meaning. This art of letter writing was so inculcated in him that many scholars say that Mirza Ghalib would have had the same place in Urdu literature as he has today, only if he just wrote letters.

The Mughal Emperor Bahadur Shah Zafar II was himself a poet. Mirza Ghalib was appointed as his tutor in 1854, thus he became an important courtier of the royal court. He was also appointed as the tutor of Prince Fakhr-ud Din Mirza, eldest son of Bahadur Shah II. Another feather in his cap was his appointment as the royal historian of Mughal Court.

Mirza Ghalib’s closest rival was the poet Zauq. Zauq was also the tutor of Bahadur Shah Zafar II. There are some amusing anecdotes of the competition between Mirza Ghalib and Zauq and exchange of jibes between them. However, there was mutual respect for each other’s talent.

Interestingly, both these men admired and acknowledged the supremacy of Meer Taqi Meer, a towering figure of 18th century Urdu Poetry.

Another poet Momin, whose ghazals had a distinctly lyrical flavor, was also a famous contemporary of Ghalib.

Surprisingly, Asadullah Khan Ghalib was not only a poet, but he was also a prolific prose writer. His letters are a reflection of the political and social climate of the time. They also refer to many contemporaries like Mir Mehdi Majrooh, who himself was a good poet and Ghalib’s life-long acquaintance.

In 1855, Sir Syed Ahmed Khan finished his well-researched and illustrated edition of Abul Fazl’s Ai’n-e Akbari and approached the Ghalib to write a taqriz (in the convention of the times, a laudatory foreword) for it.

Although Ghalib accepted it with utmost respect, yet the story is interesting. Mirza Ghalib produced a short Persian poem that criticized the Ai’n-e Akbari greatly and with it the Mughal culture which the book represented. Ghalib basically reprimanded Syed Ahmad Khan for wasting his talents on such a piece and in turn praised the British.

As a result, Sir Syed Ahmad Khan never again wrote a word in praise of the Ai’n-e Akbari and in fact gave up taking an active interest in history and archaeology and became a social reformer.

When Mirza Ghalib was thirteen years old, in accordance with upper-class Muslim tradition he got married to Umrao Begum, daughter of Nawab Ilahi Bakhsh who was the brother of the Nawab of Ferozepur Jhirka. He soon moved to Delhi, along with his younger brother. Ghalib described his marriage as a form of captivity in one of his letters.

During his marriage, he had seven children but none of them survived beyond infancy, a pain prominently felt in many of his ghazals. There are conflicting reports regarding his marriage and relationship with his wife. She was considered to be a pious and God-fearing woman whereas Ghalib was proud of his reputation as a prodigal person.

It is said that he was once imprisoned for gambling and subsequently relished the affair with pride. In the Mughal court circles, he even acquired a reputation as a “ladies man”. He loved food and especially mangoes.

Ghalib saw the decline of the Mughal dynasty and its whole bureaucracy and aristocracy, and subsequently saw the rise of the British Rule. During his lifetime he never worked for a livelihood and lived on either royal patronage of Mughal Emperors, or credits and generosity of his friends.

The Mirza Ghalib we know today became so after his death as he had himself mentioned. It was a prediction that he himself had made. After the decline of the Mughal Empire and the rise of British Raj, despite his many attempts, Ghalib could never get the full pension restored.

Ghalib was a reporter of this turbulent period and saw the end of the feudal elite to which Ghalib had belonged. One by one, Ghalib saw the bazaars of Delhi like Khas Bazaar, Urdu Bazaar, Kharam-ka Bazaar, disappear along with whole mohallas and lanes slowly vanish. The havelis of his friends were demolished and he stated that Delhi was longer the rich cultured place as it used to be. It had turned into a desert and a military camp of the British.

He died in Delhi on February 15, 1869, and was buried in Hazrat Nizamuddin near the tomb of Nizamuddin Auliya.

The house where he lived in Gali Qasim Jaan, Ballimaran, Chandni Chowk, in Old Delhi has now been turned into ‘Ghalib Memorial’ and houses a permanent Ghalib exhibition.

The first complete English translation of Ghalib’s ghazals was written by Sarfaraz K. Niazi and published by Rupa & Co in India and Ferozsons in Pakistan. The title of this book is Love Sonnets of Ghalib and it contains complete Roman transliteration, explication and an extensive lexicon.

Kulliyat-e-Ghalib Farsi, an anthology of Persian poetry of well-known Urdu poet Mirza Asadullah Khan Ghalib first released at Maulana Azad National Urdu University (MANUU) and later released at Tehran by Ambassadors of India and Pakistan jointly at a function sponsored by Iranian Ministry of Arts and Culture in Tehran on 20 September 2010.

This rare collection contains 11,337 verses of Ghalib, was compiled by Dr. Syed Taqi Abedi. Speaking at the occasion, Dr. Abidi said that the study of Ghalib would be incomplete without his Persian poetry. Although Ghalib had earned his reputation in Urdu literature, the poet of the Mughal era was more inclined towards Persian and produced high-order poetry in that language.

At the literary “ru-ba-ru session” organized by the Haryana Urdu Academy, where Dr. Taqi offered an analytical study of the works of legendary poet Mirza Ghalib, both in Persian as well as Urdu.

He informs that Ghalib wrote 1,792 couplets in Urdu by the year 1865 as against the 11,340 in Persian. He also opined that Ghalib was a visionary, a poet of humanism whose works are popular even after three centuries.

The sub-continental cinema has paid much tribute to the great poet. Be that through films, television, plays or music. Sheila Bhatia’s productions, Begum Abida Ahmed and Surendra Verma’s play performed by the National School of Drama are only some of the many artists who have made plays on the life and works of Mirza Ghalib.

Gulzar produced a TV serial, Mirza Ghalib (1988) which used to be telecasted on DD National and was a massive success in India. Naseeruddin Shah played the role of Ghalib in the serial, and it featured ghazals sung and composed by Jagjit Singh and Chitra Singh. The serial’s music has since been recognized as Jagjit Singh and Chitra Singh’s magnum opus, enjoying a cult following in the Indian subcontinent.

Mirza Asadullah Baig Khan aka Mirza Ghalib is a towering figure in the ranks of literary figures of the Indian Subcontinent. And is an important poet who needs to be studied by every lover of Urdu literature and poetry.