23 Famous Mughal Monuments That You MUST Know 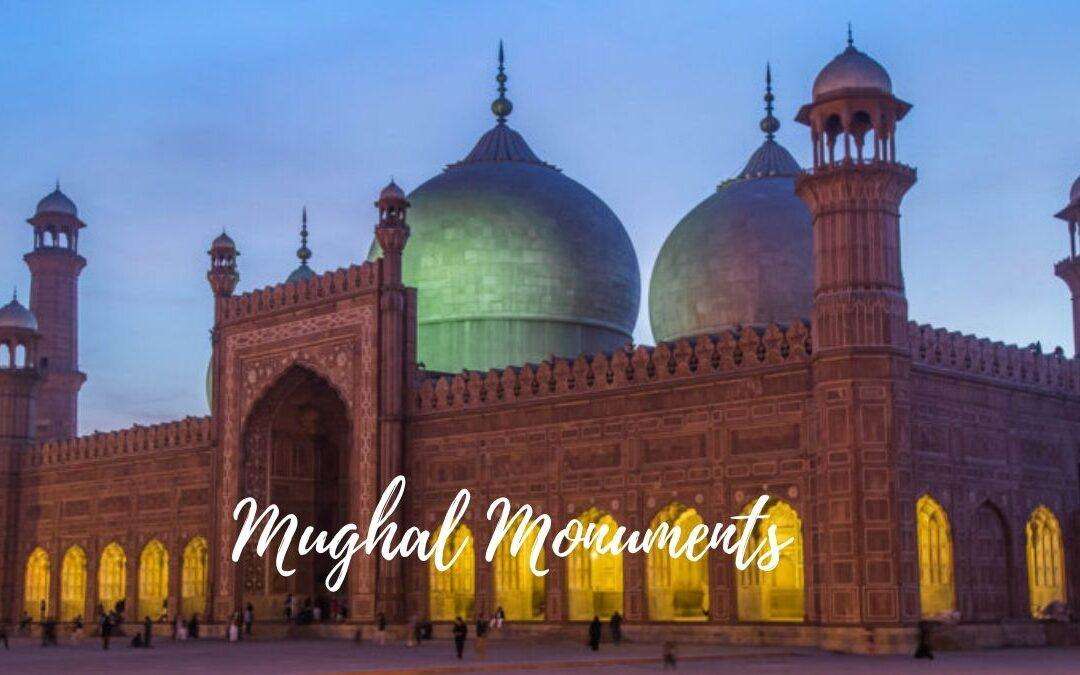 The Mughals have made a very significant contribution to not just history but to Indian architecture as well. When we think of famous Indian monuments, monuments like the Taj Mahal, Red Fort, and Agra Fort are the first ones that come to mind. And rightly so.

Their brilliant architecture, grandeur, and stunningly beautiful structures have made these monuments major crowd pullers. Several Mughal monuments were built in India during the almost 300 years that they ruled in India.

In this article, we share 23 famous Mughal monuments with you that you must know about.

23 Mughal Monuments that You Must Know

Now, without further ado, let’s begin with our list.

Of course, how can we possibly begin the list without this majestic monument at the top. Believed to be the epitome of eternal love, the Taj Mahal in Agra was built by Shah Jahan in the memory of his third wife, Mumtaz. Millions of people every year, not just from India but from all over the world travel to Agra to witness its majestic beauty. It took almost 22 years and 20,000 workers to build this masterpiece.

What served as the main residence for the Mughal Emperors for a long time, is a UNESCO World Heritage Site today. This monument, too, was built by Shah Jahan. The fort gets its name from the fact that it was made with the use of fine red sandstones. The Hall of Public Audience or ‘Diwan-i-Am’ and the Hall of Private Audience or ‘Diwan-i-Khas’ are two very famous structures within the Red Fort. Today, the Red Fort that is popularly known as the ‘Lal Qila’ is one of the top Mughal monuments in Delhi.

This massive structure whose name when translated in English means ‘the door of victory’ was built by the great Emperor Akbar in the year 1601. This monument was built to celebrate his victory over Gujarat. This monument, which is the highest gateway in the world is located in Fatehpur Sikri near Agra.

The Jama Masjid in Delhi is yet another example of brilliant Mughal architecture. It is also known as Masjid-e-Jahan Numa. This mosque was built by Emperor Shah Jahan between the years 1650 and 1656. Some 5,000 workers helped build this mosque and today, it is one of the largest mosques in the world.

This is yet another historic monument that displays the splendid architecture of the Mughal era. The Agra Fort was the main residence of the Mughal Emperors until 1638, after which their capital was shifted from Agra to Delhi.

The fort also houses some amazing structures such as Diwan-i-Am, Diwan-i-Khas, Moti Masjid and Jahangir Mahal. It is also known for its very rich history. Today, the Agra fort is one of the top visited places by tourists in the city. The Agra Fort was also declared as a world heritage site.

The impressive structure of the Humayun’s Tomb leaves all its visitors in sheer awe of its beauty and splendour. It was built in the memory of the second Mughal ruler to ascend the throne, Humayun. This monument was built in the year 1565 and was commissioned by Humayun’s wife. Mirak Mirza Ghiyat from Persia was the architect of this monument. The Humayun’s tomb is built greatly with the use of red sandstone. This monument, among many others built during the Mughal era, was declared as a world heritage site by UNESCO. Humayun’s tomb is one of the best Mughal monuments in Delhi.

The construction of Akbar;s tomb began while he was still alive; but it was later completed by his son Jehangir. Sandstone and white marble were utilized for its construction. The tomb can be found in Sikandra, on the outskirts of Agra. A beautiful garden surrounds the main tomb. Akbar’s tomb has been created using various architectural styles, making it a must-visit for those intrigued by architecture.

Situated in the city of Agra, this mausoleum is often referred to as ‘Bachcha Taj’ or ‘Baby Taj’ as it seeks inspiration from Taj Mahal. Even though it is believed to have similarities with the Taj Mahal, the artwork of this tomb is more intricate. This is one of the finest examples of tombs created during the Mughal era. When in Agra, the Itimad-ud-Daulah tomb is a must visit. This tomb was actually built for Mirza Ghiyas Beg who was the father of Nur Jahan and the father-in-law of Jahangir.

This monument, too, sought inspiration from the Taj Mahal and has a very striking resemblance to it. Due to this strong resemblance, this Mughal monument is also often referred to as ‘Dakkhani Taj’ (Taj of the Deccan). It was commissioned by Aurangzeb in his first wife, Dilras Banu Begum’s memory. Bibi Ka Maqbara, with its intricate design and artwork is one of the prime and most-visited spots in Aurangabad.

One of the best Mughal monuments in Kashmir is the Shalimar Bagh in Srinagar. It was built by Emperor Jahangir in 1619.  Through a channel, the garden is linked to the  northeast of Dal lake. Shalimar Garden, Farah Baksh and Faiz Baksh are some other names that it is known by.

Pari Mahal is yet another one of the top Mughal monuments in Kashmir. When translated, its name means ‘Palace of Fairies’. This seven terraced garden was built by Prince Dara Shikoh, Shah Jahan’s son. The garden overlooks the city of Srinagar and a portion of the Dal Lake, giving its beholder a breathtaking view. This is one of the must-visit Mughal monuments in Kashmir.

This historic monument is a beautiful blend of the Mughal and Rajputana styles. The fort was commissioned by Emperor Akbar in 1570 and it was once the residence of his son, Prince Salim. Today, it functions as a museum.

Emperor Babur built this mosque in 1527 in Panipat to commemorate his victory in the first battle of Panipat over Sultan Ibrahim Lodhi. The Mosque was named after Babur’s wife, Kabuli Begum.

After the death of his wife Shah Begum, Emperor Jahangir commissioned this tomb. This three-storied structure is made entirely of sandstone.

This stunning mausoleum is yet another testimony to the Mughal era’s impressive architecture. An elegant mausoleum, it is entirely made of marble and sandstone. The Safdarjung tomb was built in 1754 for Nawab Safdarjung. Today, this place draws many tourists from all over the world.

The Sheikh Salim Chishti Tomb in Fatehpur Sikri is an example of the finest of Mughal monuments ever built. It was built during 1580-81. It is the burial place of the Sufi Saint Salim Chishti and was built by Emperor Akbar in his honor.

The Jodha Bai’s palace is an integra part of the royal harem. It was a gift to EMperor Akbar’s Rajput wife/ When you step into Fatehpur Sikri, the beauty of this red sandstone monument will charm you. Various motifs such as lotus flowers, elephants and swans adorn its interiors.

The Taj-ul-Masjid is the largest mosque in India. It is also one of the largest in Asia. This mosque is situated at a lake called Motia Talab in Bhopal, Madhya Pradesh. Emperor Bahadur Shah Zafar’s wife Sultan Shah Jahan Begum founded this beautiful mosque.

Now, let us take a look at some iconic Mughal monuments in Pakistan.

The Lahore Fort is also referred as the ‘Royal Fort’ or the Shahi Qila. It is one of the most notable Mughal monuments dating to the reign of Emperor Akbar.

This mosque was built by Emperor Aurangzeb in 1671 and is an example of one of the finest architectural works of the Mughal era. Currently, it is the fifth largest mosque in the world. The Badshahi mosque is believed to be the crown jewel of Lahore.

The Naulakha Pavilion in Lahore is also one of the top Mughal monuments in Pakistan. The monument, with its beautiful structure, is made out of marble. It was built in 1633. The monument, at the time, cost 900,000 rupees and that is what gave the monument its name.

In this article, we discussed some iconic Mughal monuments of all time. These monuments truly are timeless works of architecture having a rich history and exude beauty and elegance in every sense.